skip to main | skip to sidebar

Just South west-ish of Munich, there is a small town (slash medium sized city if we use New Zealand standards) called Kaufbeuren. It just so happens that it is the hometown of an upstanding ex - pat German/kiwi clan who go buy the last name of Uhl. For the entire time I have lived in Okere Falls I have had to listen to tales of how amazing Germany is in general and how outstanding Kaufbeuren is in particular.

So I thought I'd finally go and have a look for myself.

I had a wee taste of Kaufbeuren just prior to our Norway adventure and came away with a favourable impression along with a rather large hangover. After Norway, we drove for 24 hours straight to get back to Kaufbeuren to make it to their annual festival. This festvial is called Tanselfest and is roughly (I'm going to get corrected by a pedantic German for this) a celebration of when Kaiser Maximillian visited the city for various reasons back in the day. The cool twist is that it is all the children who dress up and man stalls throughout the town selling traditional food/trinkets/beer. The whole place basically stops and everyone has a massive party for a week. Right up our alley... 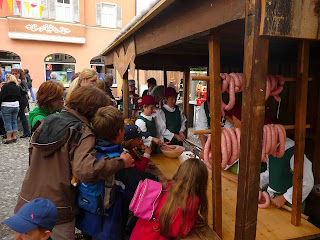 Little grommets dressed up from the middle ages. Obviously this was the wurst hut (sausage factory..) 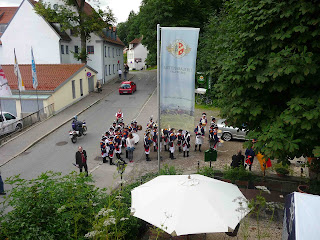 The view out Kat's house window. (Yes it's a pub and yes it is a dangerous place to have as your neighbouring residence. Radler anyone??)
There were more bands than you could count wandering around playing amazing music - as far as I could tell, if they played music outside a pub, they got free beer. Hence there are a lot of people who are very good at playing music and really good at drinking beer... 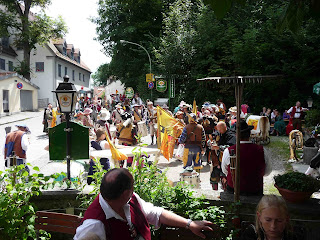 A first hand view from said pub. Obviously we had to go there to listen to the music - To soak in the atmosphere you understand...  It was also prime seating for the massive parade through the town. 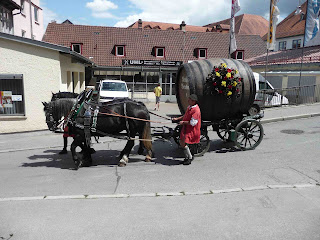 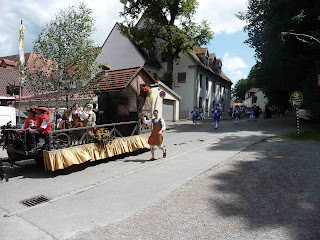 Part of the parade 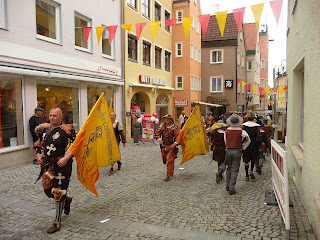 Some of the flag throwers for one of the drum bands. How cool are their outfits!

It basically goes without saying that because it was a festival, there was obviously a beer tent. Watching people parade around town all day is thirsty work. Naturally we made our way to the tent to partake in some delicious ales. 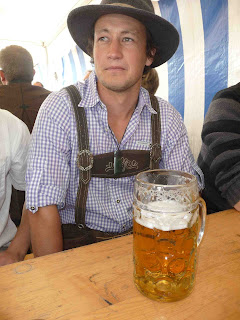 Lederhosen, check. One litre of beer, check. General hilarity about to occur? Naturally. 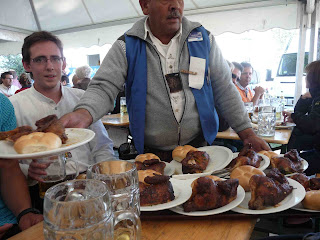 Half a bloody chook and a bun anybody? Just like a hangi. Except that the chicken tastes amazing and not like steamed dirt... 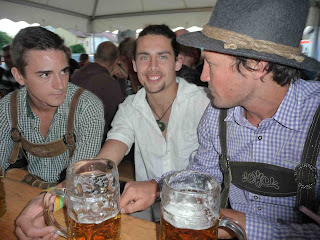 Deep conversations ensued. Bit intense this one by the looks. 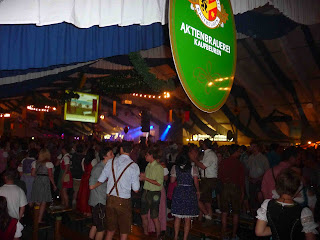 Aaand then we went inside... And raged on tables to part english, part German covers of english power ballads - ideal, Jamie Sutton was in heaven. 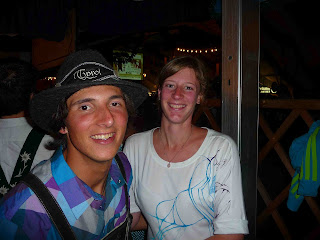 As seems to be the theme of my German experiences, I just made it onto a train (literally just. I had to run to catch it and throw my bag on a'la wild west without paying) to Munich to catch a flight to Japan. Hungover. Again.